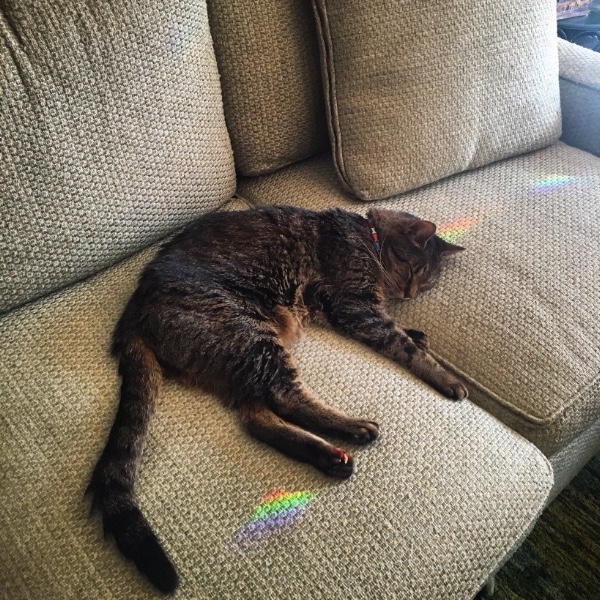 Thank you SO MUCH for the many birthday wishes, as well as for your condolences on the death of my sister’s cat Barkley, who came to live with me last January when she moved overseas. I haven’t had a chance to respond to everyone, but I want you to know that the messages were read and appreciated.

As promised here is the Weekly Weather Hurricane Report, Part Deux. Once again, let’s take a look at where and when the storm hit.

Hurricane Irma made her first landfall within the United States proper on Sunday, September 10th at 9:10 AM in Cudjoe Key, Florida — after skirting Puerto Rico and directly striking the US Virgin Islands (both of which are, of course, territories of the United States, whose inhabitants are American citizens). For the purposes of this analysis, I’m choosing the Florida landfall as Irma’s “natal” moment vis-a-vis the USA. It’s an interesting chart, and I think it does a good job of explaining the storm’s character and relationship to history.

In last weekend’s newsletter, I talked about how the United States natal Moon at 27 Aquarius is currently receiving a visit from the transiting South Node of Fate — which has been bobbing around at the degree of 24 Aquarius since July 7th (and will remain there till September 19th; the Nodes SLOW DOWN dramatically during Eclipse Season). The South Node represents loss and release, while the Moon is “home” and the ruler of the ocean.

August’s US-centric Solar Eclipse triggered this already-tense transit, literally “releasing” thousands of homes in various parts of this hemisphere into the water, and asking us ALL to reassess our old attachments, to evaluate whether they are helping or hindering us as we continue on our journey.

The Irma Ascendant at 14 degrees Libra is exactly on the US natal Saturn, squaring the US natal Sun at 13 Cancer; while the US natal Sun sits directly on the Irma Midheaven at 14 degrees Cancer. Restructuring (Saturn) of our life is needed. The events of the season will continue to dominate the news and change the face (Ascendant) of places like Miami, Houston, and the Caribbean islands for a long time to come, as we rebuild damaged infrastructure (Saturn) and work to improve our image and standing in the world (Sun, Midheaven).

Now, as savvy students of astrology, you might expect that, in looking at natal charts for the parts of the country hit most directly by Irma, we would find a particularly tight synastry with the hurricane’s chart (even more so than the US at large) — and indeed you would be right.

Natal charts for both the city of Miami and the Florida Keys have exceptional resonance with the Florida landfall chart for Hurricane Irma. In fact, EACH ONE of these three charts has the Nodes of Fate at precisely 24 degrees on the Aquarius-Leo axis.

The Florida Keys were claimed for the United States on March 25th, 1822; and the city of Miami was incorporated on July 28, 1896. Although separated by more than 70 years — and by four Nodal cycles — both events took place when the South Node was at 24 degrees Leo and the North Node at 24 degrees Aquarius.

This fall, both locales are getting a Nodal reversal from the Eclipse Nodes. The current transiting North Node at 24 Leo is sticking like a magnet to their mutual South Nodes, while the transiting South Node clicks with their North Nodes.

When two people have Nodal connections in their charts, I call it “the giant sucking sound” — each person tends to feel deeply drawn to the other, often due to a past life relationship. And when an individual encounters a return or reversal from the Nodes in the heavens (which happens about every 9.5 years) it indicates a major new shift in direction. Whatever it is, when the Nodes are involved, it’s fated.

As a rule, Nodal returns (i.e. when the transiting North Node matches the natal North Node) tend to be easier than reversals, which are often tempestuous. These Nodal reversals certainly haven’t been at all easy for those in the path of Hurricane Irma. That said, they do provide an opportunity for reassessment of one’s life, bringing in new and improved approaches.

Hopefully, we as a society can move forward with a more acute awareness of climate change and the impact that rising sea levels have on our coastlines. Eclipse Season’s job is to transform us. The Eclipses are STILL here and their energy is one of transformation, whether we agree with it or not.

We have another trigger of the Eclipses next week on the 17th and 18th, when the Moon is occulted by Venus, Mars, and Mercury, and Venus triggers the Solar Eclipse degree of 28 Leo yet again, before she enters Virgo on the 19th.

Many of you have written to ask for more information about the fires out west — another manifestation of the Eclipse energy. The short version is that the Solar Eclipse chart, relocated for the west coast of the United States, has the Grand Trine in Fire angular: Uranus in Aries is on the Descendant, indicating that the region is facing the change (Uranus) of Fire. I hope to write more about this in a future column.

One great gift, given all the rebuilding that’s beginning, is the lovely and helpful New Moon in Virgo next week. I’m teaching a webinar on Monday night, to discuss how we can work most productively with its energy. I hope you can join us. Either way, take time on Monday to talk to Venus as she hits the Eclipse degree.

Be kind, keep moving forward, and give what you can.

P.S. The photo above shows Barkley, a few weeks ago, snapped by my talented assistant Kate Armstrong Ross. She calls it “Rainbow Dreamer.” 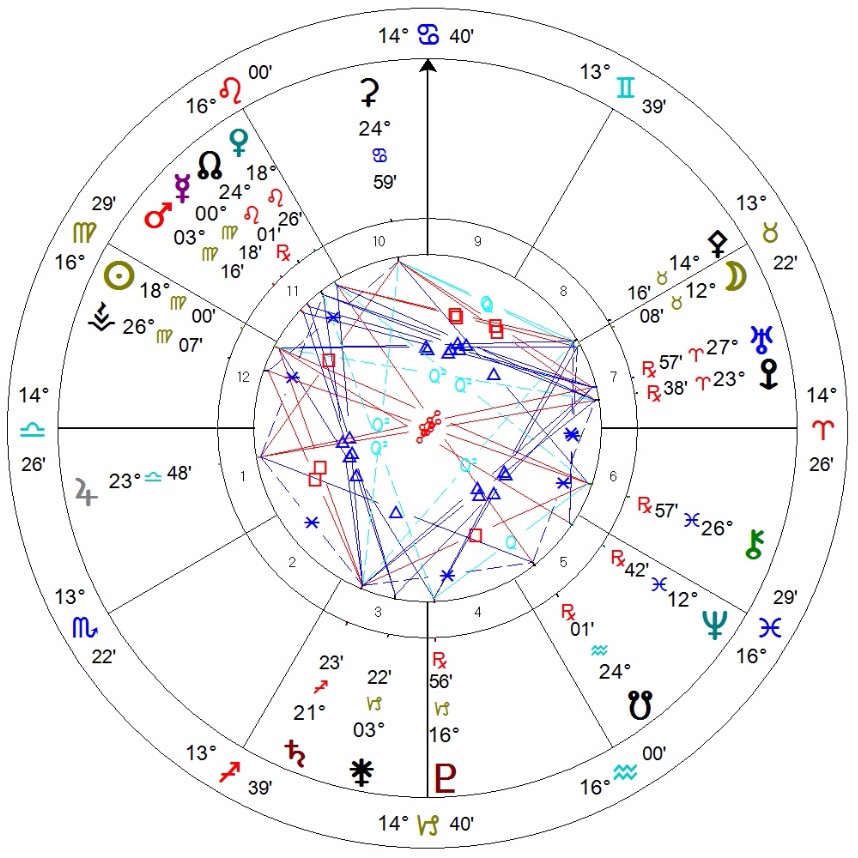 Hurricane Irma’s First Landfall in Florida
Chart cast for 9:10 AM on September 10, 2017 in Cudjoe Key, FL 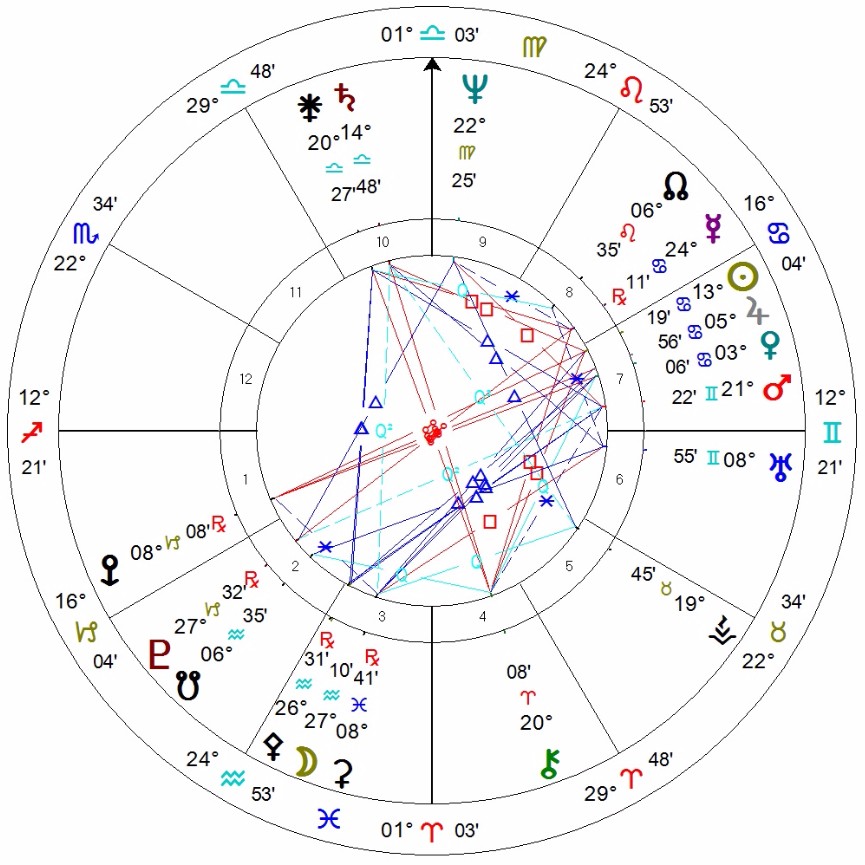 The United States of America (Declaration of Independence)
Chart cast for 5:10 PM on July 4, 1776 in Philadelphia, PA 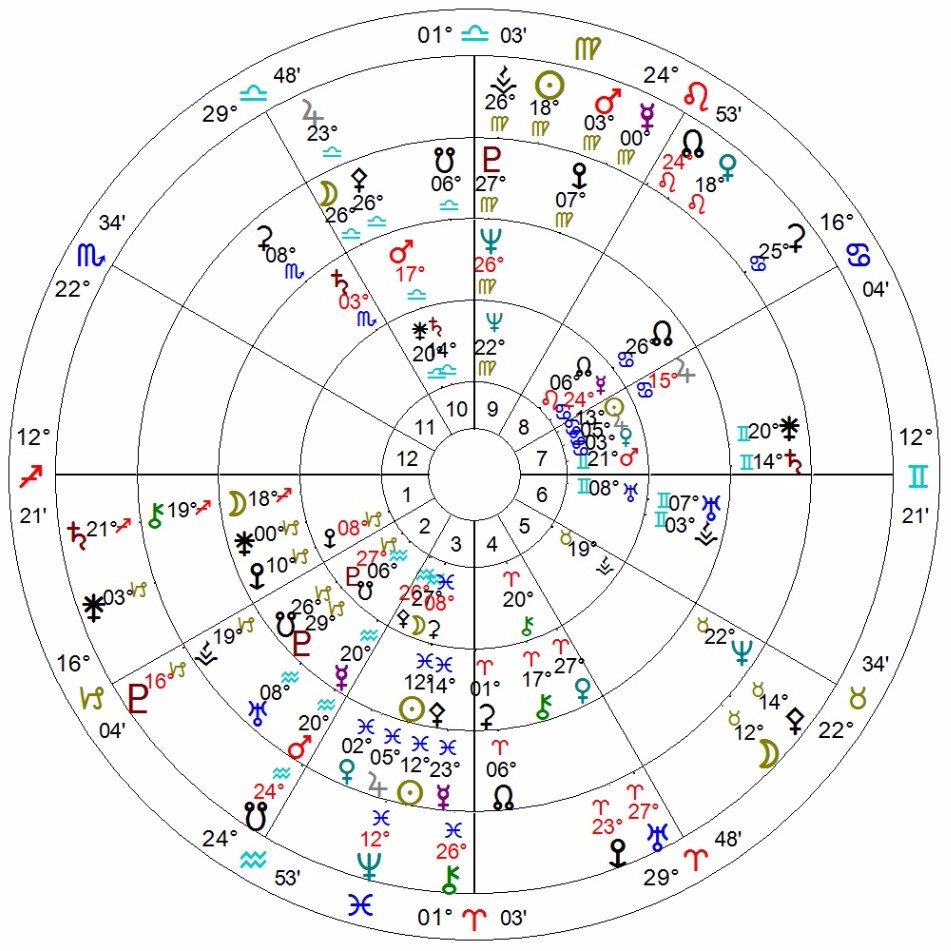 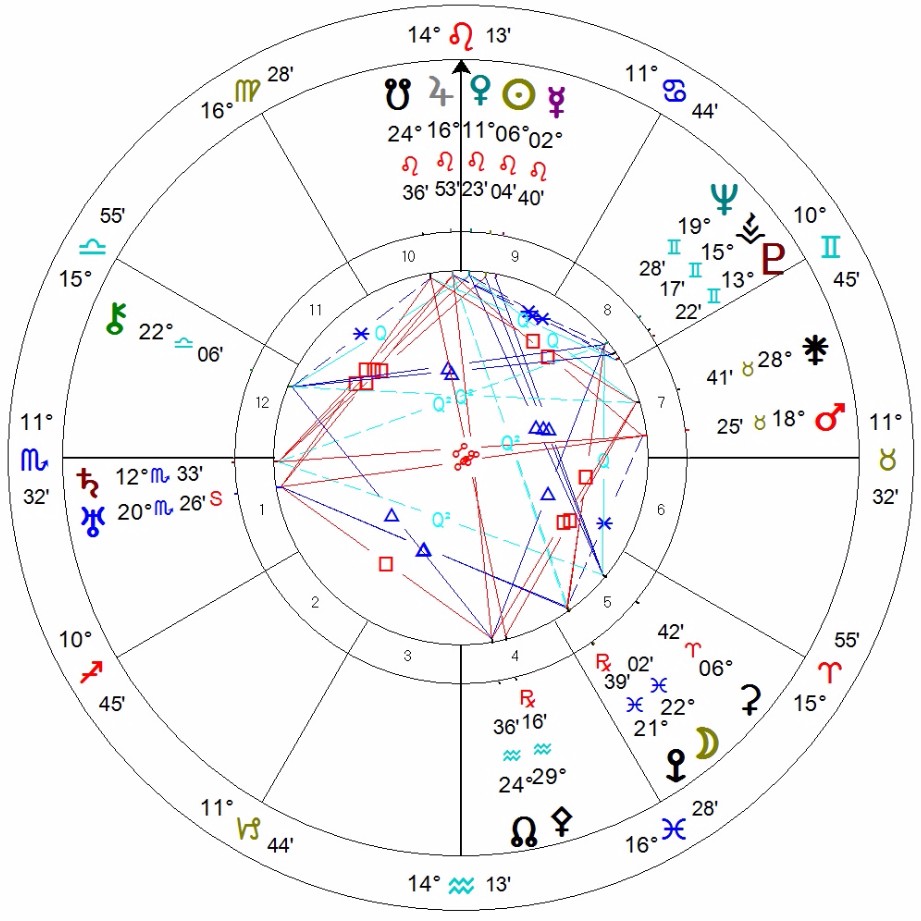 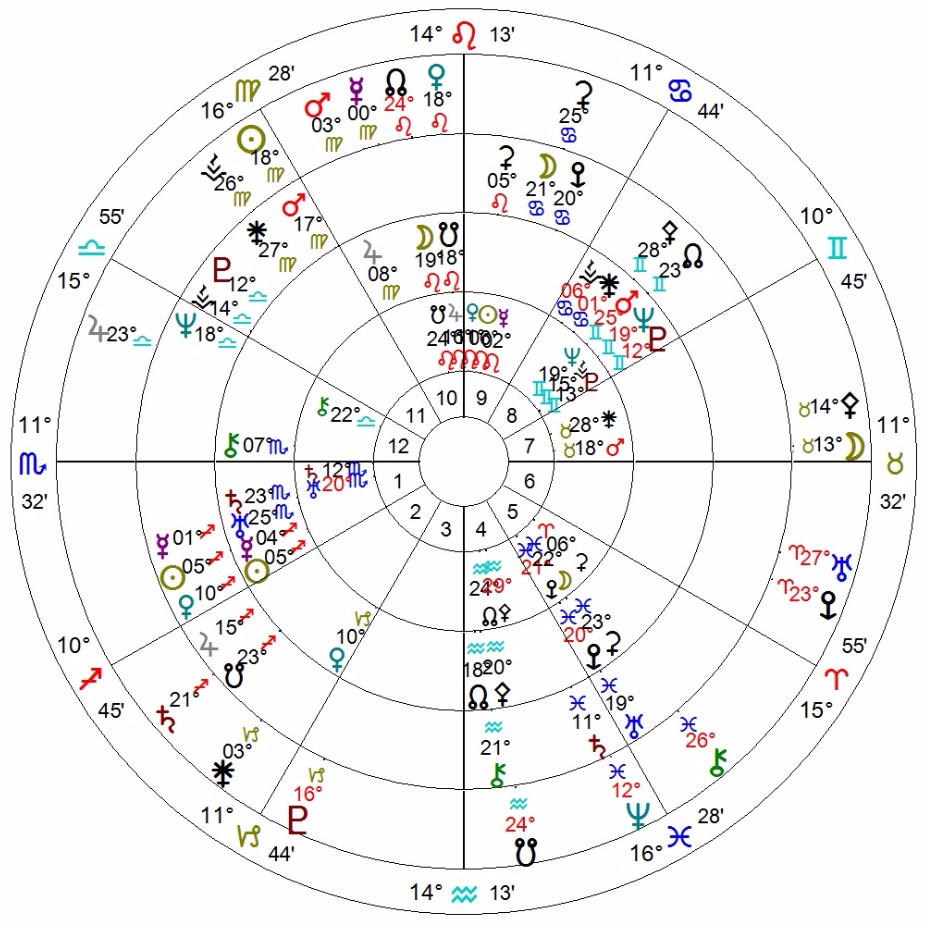 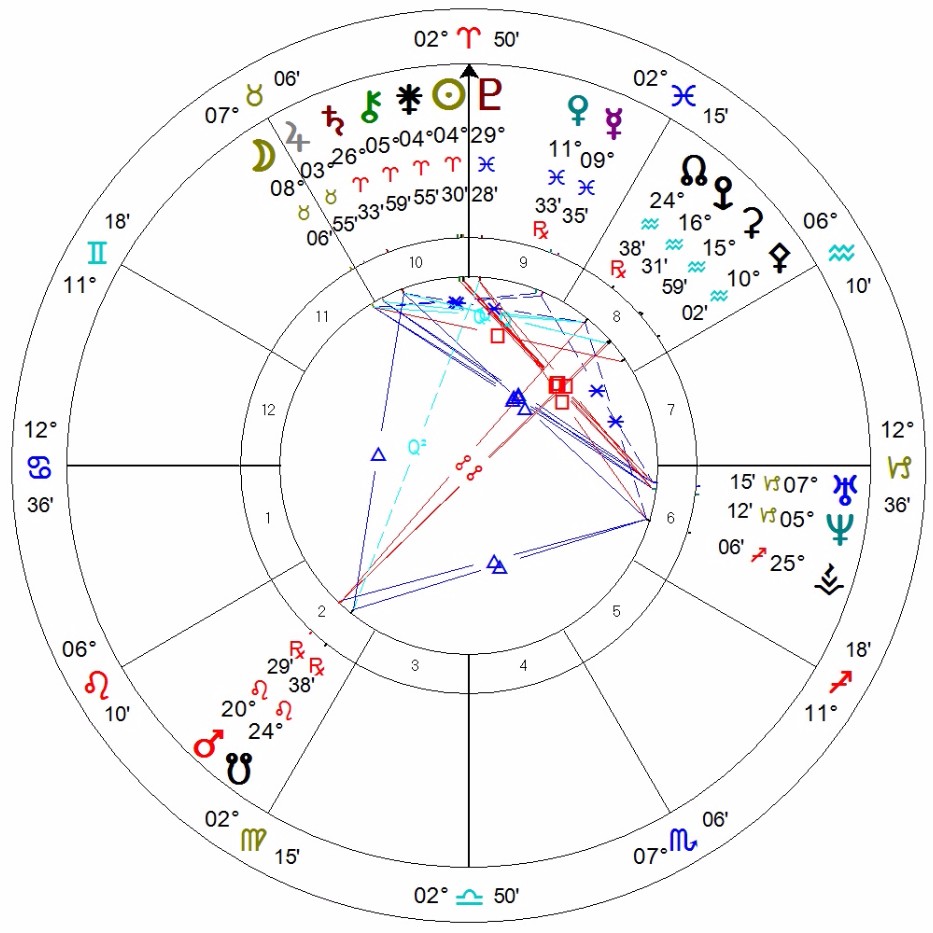 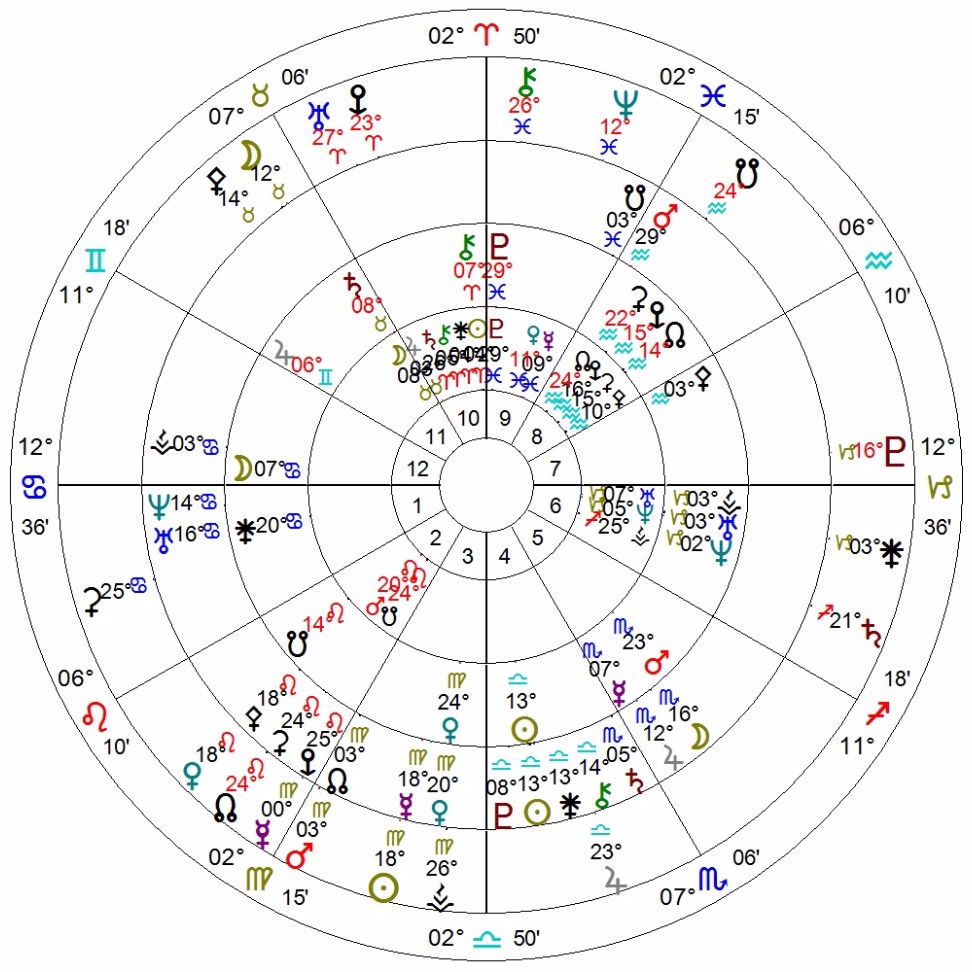