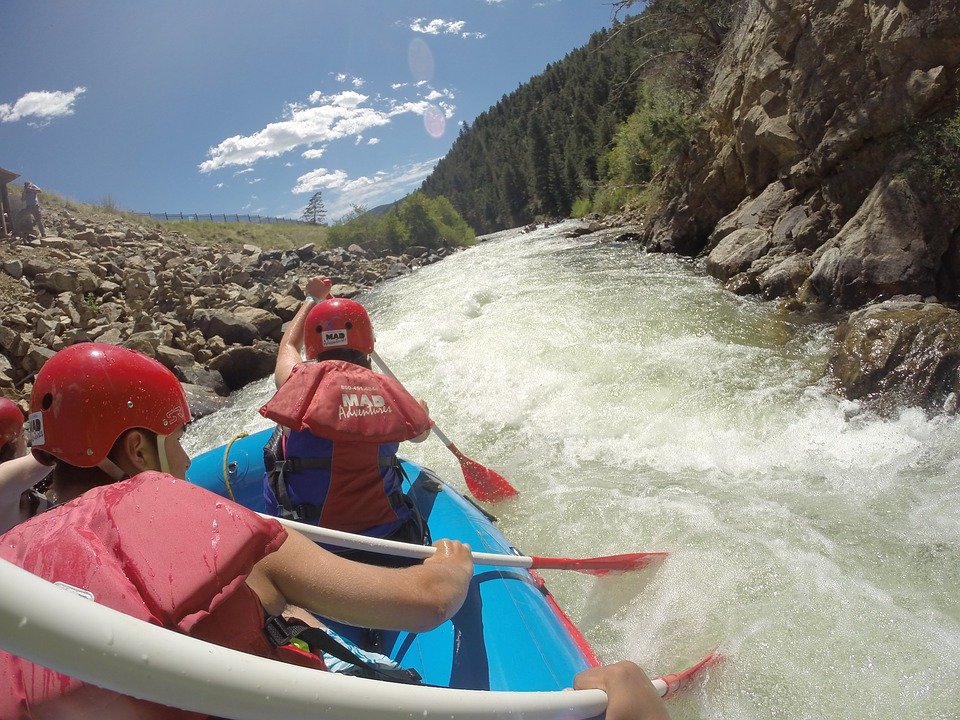 Have you ever been whitewater rafting?

When I went, some years ago, the guide said, “If you get thrown out of the boat, your job is to float down river, feet first, avoid the big rocks, and we’ll pick you up at the bend on the other side of the rapids.”

I think that’s pretty good advice under any circumstances, and it came to mind today as I was thinking about the eight long weeks of Eclipse season — longer than usual — that we have ahead of us now (having started with the New Moon last Friday).

This is not ordinary time. It’s intense because of the Eclipses, and it’s extra intense because the Nodes of Fate are currently sitting at the anaretic (final) degrees of Sagittarius and Gemini. Sagittarian questions of truth, justice, tolerance, freedom, and, yes, fire, are all contested: here in the US, our national conversation has recently centered on two (Gemini) separate-but-similar stories about white supremacy and state-sanctioned violence.

Look for pairs of stories in your own life: what can each light up about the other? And what situation has been going on for a long time, till you suddenly find you can’t stand it ONE MINUTE longer? There’s a lot of that going around, too.

Coming up next week, on Wednesday, June 3, retrograde Venus and the Sun meet up at 13 Gemini (scroll down for image!), forming what we call a Venus Star Point, and starting off a brand new four-year love-and-money cycle in the Gemini House of your chart. Look for an infusion of good luck in some part of your life.

Pocket that gift and prepare to use it later in the week, when on Friday, June 5, we meet our first Eclipse of the season, at 15 degrees Sagittarius-Gemini. This Lunar Eclipse is most emotional. It invites us to reminisce about and reinterpret what happened around December 7, 2018 and around September 5, 2019. Full Moons in fire make for a polarized energy: us vs. other-than-us. What’s other-than-us for you, and should you reconsider that?

Not long after that, there’s a Solar Eclipse on June 21, 2020. This one happens to be located on the World Point (0 degrees of the cardinal sign Cancer) which means BIG NEWS . .  and furthermore, this Eclipse is a part of the same Saros Cycle as the Solar Eclipse of June 21, 2001, the Eclipse in effect on 9/11. This summer marks a cultural pivot-point: we can’t possibly go back to “normal” — nor should we, even if somehow we could! The only question is, which way forward?

We’ll collectively be making *that* decision around the time of our third and final Eclipse, on July 5, 2020, conjunct the natal Sun of the United States birth chart. More on this to follow!

So, how will you dramatically reshape your life within the next seven or eight weeks? What have you been meaning to create and not gotten around to? What are you waiting for? It’s a good time to start therapy, to begin writing every day, to reach out to estranged family members, form a little online support group, join a 12-step program. The Universe wants to help you get unstuck: the structures we’re used to are crumbling, so we might as well build something better.

And if the “unsticking” comes in such a rush that you can’t stay in the boat, just follow the current (feet first!) and see where it takes you.

One of the other features of Eclipses is that people or situations that have been hanging on by a thread, snap. Watch for quick changes, including people leaving. This eight-week period has a flow of emotion followed by awareness followed by emotion.

Mercury, the God of Words and Thoughts, is in his retrograde shadow as of June 1 and in Cancer, answering to the Moon, who changes signs about every two-and-a-half days. As long as she rules him, Mercury is highly emotional, cloudy, with frequently-changing moods. You may not want to feel what you’re feeling or see what you’re seeing; but as Jungians say, “What we resist, persists.” Sit with the discomfort and it will pass quicker.

Hang on, we’re launching into some turbulent white water, with Mars in Pisces coming to meet up with Neptune on June 13. Expect the river to be rough and wild. But you’ll catch up with everybody, just around the bend. Catch you on the other side of the rapids!