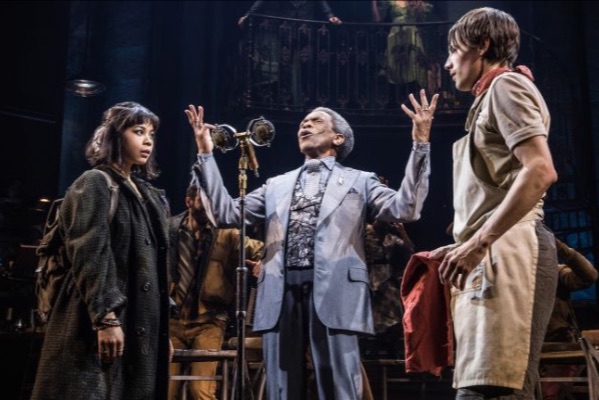 Planets in Gemini, naturally, answer to Mercury — and it happens that Mercury in this chart is ALSO in Gemini, doubling and quadrupling the quick, nervous energy of that sign, which flows through the cosmos and through our lives on the New Moon.

But Mercury is not only in Gemini: he’s moving through the last (most potent) degrees of Gemini, and he’s doing it “out-of-bounds,” traveling beyond the Sun’s ecliptic. The Herald of the Gods is certainly having a moment; I’m predicting a Tony win for Andre de Shields for his soulful performance as Hermes (a.k.a. our friend Mercury) in Hadestown.

Out-of-bounds planets behave in a way that’s “past normal.” Good or bad, out-of-bounds is not average. If you’ve ever come for a reading with me and I told you you had something OOB, I probably described it as an area of your life where your tendencies transcend what’s expected. It’s hitting a home run in baseball, or a line drive into the stands. It’s the times when people say to you, “Wowowowow, you’re AMAZING!” and it’s the times they say, “Gee, I just don’t know what to DO with you when you get like that!”

Under this New Moon, events unfold very quickly. The meeting leads to the agreement leads to the contract leads to the project, in rapid succession. It’s also a highly REACTIVE energy. Pay attention to your feelings. Choose to breathe and lower your stress instantly. We can set each other off in storms of escalating anxiety, when the planets in the sky are like this. The Moon, in particular, has a lot of ants in her pants. Give her a bath, feed her, calm her down. Process with your therapist or read her an inspiring book.

When the chart is cast for Washington, DC (and that’s the chart that governs the whole of the United States, since our nation’s capital is there), we find the Sun and Moon in the Twelfth House, right beside the Ascendant. The Twelfth House means action behind the scenes; Venus and Uranus are living there as well — see the chart image below!

All these planets in the Twelfth can activate unconscious behavior, unprocessed trauma, relationship drama, etc. It’s the blind spot of the chart; on a bad day, it also triggers Sixth-House health problems around the stomach, arms, and nervous system.

Neptune, Jupiter, and the Ascendant-for-Washington are forming a volatile T-Square. The Ascendant represents publicity, and retrograde Jupiter at 20 degrees Sagittarius is precisely conjunct Donald Trump’s natal Moon and South Node. I would NOT be surprised if his recent tax returns were made public soon; we’ve already learned that he lost a billion dollars between 1985 and 94. (As it happens, the Sabian Image for Mercury’s degree in this chart is actually “a man declaring bankruptcy” — more on that in my New Moon webinar next week!)

Venus we find separating from a trine to Pluto under the New Moon. (Right now, this aspect is approaching, and it will perfect the night before, on June 2nd.) The Goddess of Love is crawling out of the underworld, finally settling in for some bloom-time in the last degrees of Taurus. What did you learn in the darkness? How is your Venus turning towards the light? Which way are you looking now?

This seems like a good time to remember that change is all there is. With no Fixed-sign planets in the sky except Uranus and Venus, and all the rest Cardinal or Mutable, change feels especially rapid and PERMANENT at this moment in time.

Enjoy the bloom, and watch for the breakthrough!

Big hugs to everyone,