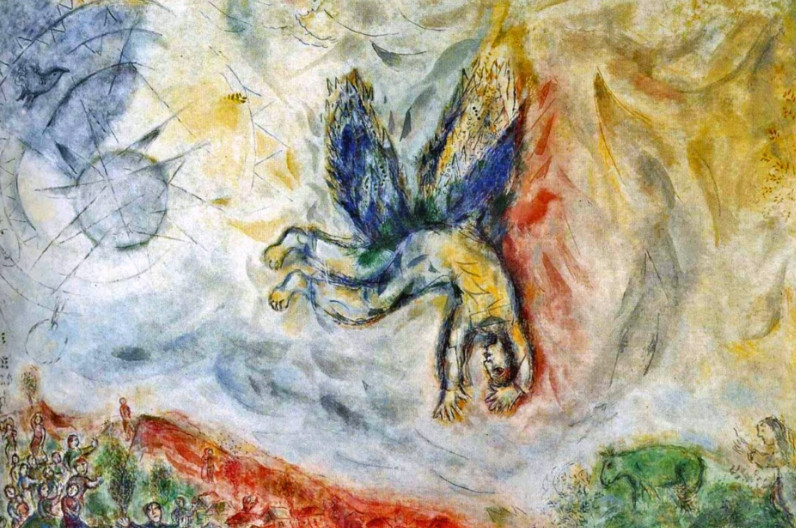 Fasten your seat belts, everybody. Uranus stations to go retrograde this Friday, July 29th at 5:06 PM Eastern US time. When an outer planet stations, it’s generally a Very Big Deal. We feel its characteristic energy in our individual lives – and we tend to hear about it in the news. Uranus represents the principle of chaos and change, that which shocks and electrifies us. Uranus is anything that makes us aware of our common humanity and the need to work for the greater good, as well as anything that makes us aware of the rifts and divisions between us. He rules astrology, the internet, quirky people, and radical politics, among other things.

Some astrologers argue that the planet Uranus should have been called Prometheus or Icarus: he seems to contain those two archetypes, in addition to that of Ouranos, the ancient Greeks’ primeval sky god – who made love to Mother Earth and fathered the first beings, the Titans, before being castrated by his son Saturn.

Prometheus, according to his myth, sculpted the first humans from clay and brought them to life, then stole divine fire from Mount Olympus to keep them warm: for which crime he was sentenced to the everlasting torture of having his (immortal) liver devoured by eagles, over and over again every day. Each night his liver grew back as he hung from the rock!

Icarus was the son of the great inventor Daedalus, who flew too high on the wax wings his father built him for their escape from Crete. The wax wings melted and Icarus plunged into the sea. (This scene is a frequent subject for depiction in Western art; the painting above is Marc Chagall’s version.)

Each of these stories is about the tension between order and chaos. They reflect our primal need to push boundaries, power through difficulties, and question the “rules” in order to create something new and different (and hopefully BETTER) . . . but each story also contains a cautionary “moral” showing what often happens to rule-breakers.

The impulse of Uranus, which we all have somewhere in our chart, and in our psyche, is to do what he wants to do Right This Minute, caution be damned. Watch out for your own reckless impulses right now. This is a great time to follow the Muse towards a big creative breakthrough; just don’t do it at the risk of your own or anybody else’s safety.

The planet Uranus is, moreover, traveling with Eris the Goddess of Discord all this year. Their first conjunction was in June, just before the terrible massacre of LGBTQ folks in Orlando, as well as Hillary Clinton’s glass-ceiling-shattering primary victory. Uranus and Eris will meet up again on September 25th, and then on March 17th, 2017 – but those are just the dates when the aspect perfects; the two planets will be within a few degrees of each other, chatting and sharing their energy, for the whole intervening period. This combination is a very volatile one, to which I (along with many other astrologers) attribute the numerous outrageous shootings we have had here in the United States this summer, as well as the seemingly-increased political instability here and around the world: Trump, Brexit, Turkey, Nice, etc.

The energy of Uranus’s station will be with us all this week and next. When you can, take a look at your natal chart (and if you don’t have a copy, email me with your birth data and my lovely assistant Rose will send you one, gratis). Where does the Uranus station degree, 24 Aries, fall in your chart? Which House does it land in? What are the keywords for that House?

We can each expect change and excitement in *that* area of our life, as well as in whatever House is ruled by Aquarius, plus whatever House contains our natal Uranus. (And if this is all Greek to you, but you want to learn more, you might consider signing up for my Uranus Webinar TONIGHT – you can scroll down for more details.)

Last week, I said that we needed to work on clarifying and integrating our beliefs under the Leo Sun, and be prepared to fight for them under the Uranus station. Do not go gentle into that good night. Listen to Rachel Platten’s “Fight Song” again. Stand up for yourself and for those in need. And please note that it is possible to do so without being violent, or even particularly aggressive! Stay strong, with clarity and fire in the belly.