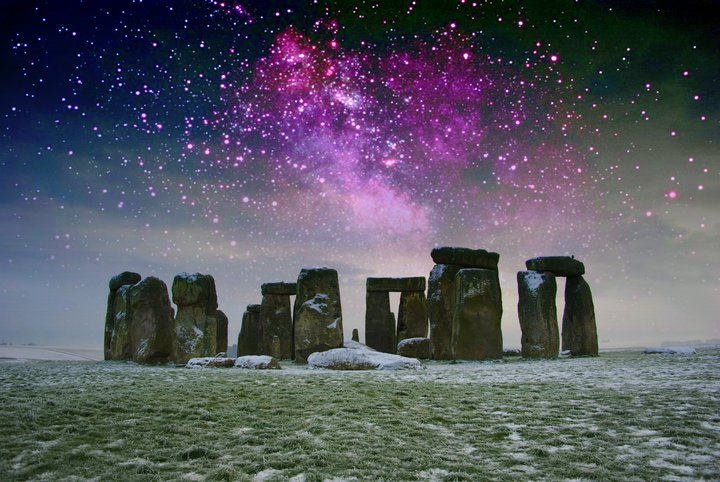 It is another big week in the heavens, as the coming weekend features a REALLY big New Moon in Gemini – given extra oomph by a tight conjunction with Venus, and a glorious Venus Star Point in Gemini perfecting next Monday.

The New Moon itself takes place on Saturday evening, June 4th, at 10:59 pm EDT. Based on the chart, it’s looking to be the most potent New Moon of 2016, and maybe even of the next 8 years! The Moon, the Sun, and Venus are grouped together at 14 degrees Gemini, filling out the empty leg of the mutable T-Square that we have been working with since last August.

Jupiter in Virgo, Saturn in Sagittarius, and Neptune in Pisces (three major planets, all in mutable signs) have been squaring each other, off and on, for the last ten months. Now, with the addition of the Moon, Sun, and Venus in Gemini, EACH of the four mutable signs is duly represented, turning our long-term T-Square into a shorter-term Grand Cross.

Moreover, when the New Moon chart is cast for the East Coast of the United States, the Grand Cross planets all fall in fixed Houses: the Second, Fifth, Eighth, and Eleventh. All these factors combine to create a highly-charged, action-oriented energy system that is prepared to help us make permanent changes to the structures of our lives.

Remember archetypes of Architect (Jupiter), Contractor (Saturn), and Client (Neptune) that I talked about in my Setting Your Intentions for 2016 Webinar back in January? These three planets have spent the last ten months working together, and pushing back and forth against each other, asking you to get down to brass tacks and build your “dream house,” or dream life, before Jupiter goes into Libra at the end of this summer.

Now that the Gemini Moon, Sun, and Venus have joined the conversation, these friendly planets are infusing the process with new grace and ease. They want to help the Architect, Contractor, and Client to resolve their interpersonal conflicts and combine their different perspectives into a cohesive plan. Round windows or square? Blue paint or yellow? Granite or linoleum? Building a house is an enormous project: expensive, time-consuming, often emotionally fraught. And each tiny choice can have huge ramifications: for the price, style, feel, project schedule, and longevity of your dwelling. It’s easy to see why we might get overwhelmed!

Now, in the thick of this process, the Gemini New Moon offers us a breath of fresh air. The Moon, Sun, and Venus are ready, willing, and able to help us understand the conflict and rank our choices. Plan A, Plan B, or Plan C? It’s time to put the puzzle together, to write a harmony for the melody. Make a list, make a decision, then speak it loud and clear. It’s also a good time to send reminder emails, or follow up with those whom you are waiting to hear back from.

And whatever tough decisions you might have to make, as Gemini reminds us, your happiness depends much more on what you THINK about it all, than on whatever happens in the so-called real world. As Hamlet says: “There’s nothing either good or bad, but thinking makes it so.” Is the glass half empty or half full? Do you want to be an “every-cloud-has-a-silver-lining” person or a “no-good-deed-goes-unpunished” person?

The wisdom of Gemini is, of course, that BOTH are true. Maybe there is no such thing as Truth. The glass is both half empty AND half full. Whatever you want to call it is totally up to you. The real question is: how does it make you feel, when you decide to define the glass as half empty? Or when you describe it as half full? Make your choice accordingly. (I suggest full!)

Because the Moon, Sun, and Venus are all in Gemini – they’re currently answering to Mercury, who is the ruler of that sign. Our buddy Mercury, meanwhile, is dancing through Taurus, which makes the otherwise-flighty energy of Gemini somewhat more practical, earthy, and stable.

In addition, Mercury is currently approaching the same degree (22 Taurus) where Jupiter and Saturn last joined each other on May 28, 2000, and he’s also getting ready to leave the shadow of his recent retrograde (24 Taurus) . . . *and* at the end of June, Mars stations direct at 23 Scorpio, opposite these points. Thus we’re hearing echoes of two stories from our past, right now, and for the next month: the Jupiter-Saturn story from May 2000, and the Mercury story from before he stationed in April. Get ready to move forward on communication-related projects from either of those time-frames that have since stalled or gotten sidetracked.

There’s lots to look forward to, as you can see.

As always, I would encourage you to take some time during this New Moon period to meditate on what you want to create: intentions seeded now will have ramifications for the 30-day and two-and-a-half-year Moon cycles, as well as for the upcoming eight-year Venus Star Point cycle.

Here’s to the life of the glass half full! 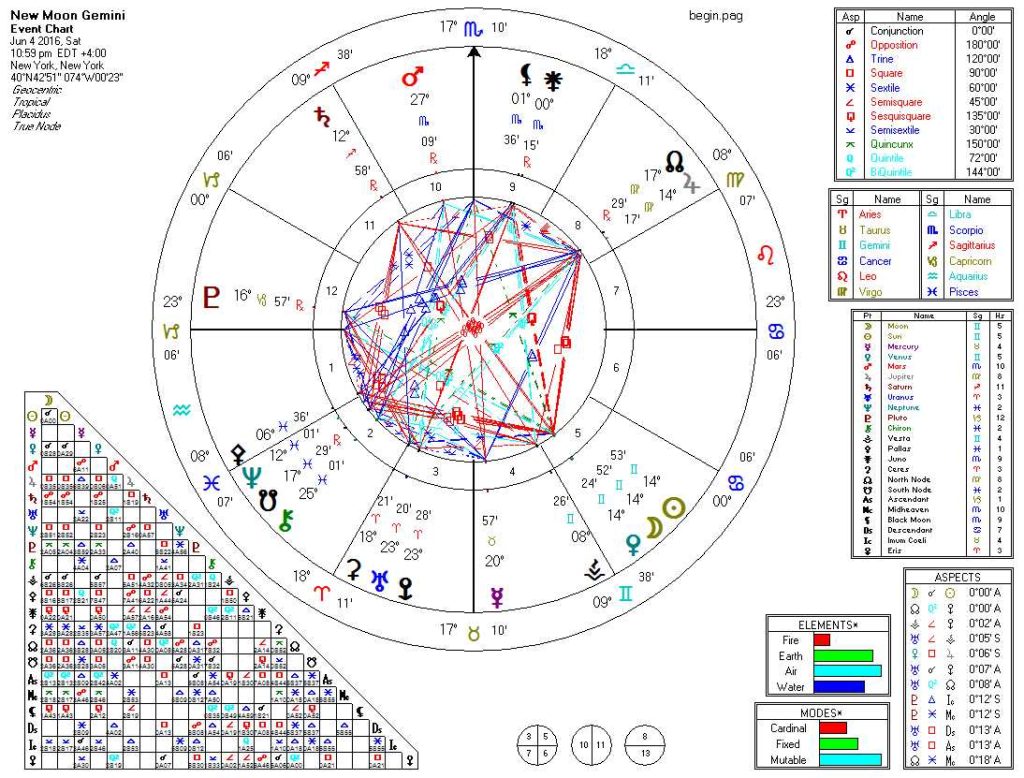 Lynda Hill’s interpretation of the Sabian Symbol is

Commentary: ‘Two Dutch Children Talking and Studying Their Lessons Together’ represents the need for clarity and for those of like mind to share and communicate spontaneous and creative ideas. The ‘Two Dutch Children’ are discussing and sharing their thoughts, ideas and feelings about ‘Their Lessons’. Every now and then they are likely to bring up side issues about their personal lives and to chatter about friends, etc. It may be that they are meant to be only ‘Studying Their Lessons’, however they probably have the freedom to be able to relax and take things easily. The people around them probably won’t be interested in what they are ‘Studying’, although they may sometimes pretend to. Some may feel left out because the level of conversation or the ways of communicating are so carefree, in-depth or inaccessible to others’ minds.

Oracle: This Symbol shows people enjoying each other and sharing common goals. When a lot of the confusion of the day-to-day life is put aside, there can be an understanding of each other or those around you that is so strong it can feel like a soul connection. As these are said to be ‘Dutch Children’, feeling cut off and isolated because of language or cultural separations can be frustrating, but if you have companionship with someone on your wavelength, it is much easier to bear. You should be able to relax and feel comfortable with your associates. Try not to look for or create any unnecessary complications. Get on with your job quietly and effectively with company that seeks the same things in life. Getting a grip on life’s ‘Lessons’ will enlighten and enrich everyone in this situation. Finding a friend to learn and be creative with could lead to some valuable lessons about friendships, relating and the world.

The Caution: Failing to communicate in depth. Unsophisticated viewpoints. Excluding others as “unworthy”. Societal or racial prejudice. “Hearing voices” that don’t make sense. Not hearing the opinions of others that may further the understanding about how the world works. Speaking a foreign language so as to exclude others.

The language of friendship is not words but meanings. Henry David Thoreau

Friendship is a single soul dwelling in two bodies. Aristotle

A friend is a present you give to yourself. Robert Louis Stevenson

The pleasure of reading is doubled when one lives with another who shares the same books. Katherine Mansfield

A different language is a different version of life. Federico Fellini

I had no idea what I wanted to do with my life, so nothing of what I was studying seemed to fit.

I know now that I should have taken advantage of that time and that I missed a great deal of the opportunity to educate myself. Harrison Ford

In studying the way, realizing it is hard; once you have realized it, preserving it is hard. When you can preserve it, putting it into practice is hard. Zen Proverb

Lynda Hill’s work appears with her permission.  Check her out at Sabiansymbols.com